Short, topical, and relevant opinion editorials and commentary by NAADSN experts on North American and Arctic defence and security topics.

US Army Alaska is Making a Huge Transformation to be the Army’s Arctic Force, by Hilde-Gunn Bye featuring Troy Bouffard, High North News, 16 May 2022

The Canadian Rangers at 75: The Eyes and Ears of the North, by Eilís Quinn featuring P. Whitney Lackenbauer and Peter Kikkert, Radio Canada International, 2 May 2022

NAADSN Quick Impact: From ‘As Needed’ To Baseline Duty: Debating the Role of the Canadian Armed Forces in Domestic Emergency Response, Adam P. MacDonald, 2 May 2022

The nuclear renaissance is an opportunity for Canada. Will we seize it?, by Heather Exner-Pirot, The Ottawa Citizen, 25 April 2022

By spending more on defence, the true north concedes it must be stronger if it wants to stay free, by Bartley Kives, featuring Andrea Charron, CBC News, 10 April 2022

The Current with Matt Galloway featuring Will Greaves, CBC, 5 April 2022

‘Now is the time for us to act’: Why Canada needs to update it’s Northern defence system, the Alan Carter Radio Program featuring P. Whitney Lackenbauer, AM 640 (Toronto), 1 April 2022

NAADSN Quick Impact: Conceptualizing Arctic Security in an Era of Strategic Competition: A Canadian Perspective by P. Whitney Lackenbauer, opening comments for a panel on “Allieredes perspektiver” and the hearings on  “NATO’s rolle i Arktis” organized by the Center for Military Studies at the University of Copenhagen and Folketingshøring, Copenhagen, Kingdom of Denmark, 23 March 2022.

The Liberals’ continued policy of doing as little as possible for Ukraine, by Rob Huebert, National Post, 21 March 2022

How does Russia’s invasion of Ukraine affect you? What questions do you have?, Cross Country Checkup with Ian Hanomansing featuring Dr. Rob Huebert, CBC,  27 February 2022.

Why The U.S. Is Falling Behind In Arctic Shipping, featuring Gabriella Gricius, CNBC, 16 February 2022.

In a dangerous world, Canada is unprepared on every front. It needs to come to its own defence by John Ibbitson featuring Dr. Andrea Charron and Dr. Rob Huebert, Globe and Mail, 14 January 2022.

Canada must do its part to defend the Arctic. That requires F-35 purchases and NORAD modernization by Dr. Rob Huebert, the Globe and Mail, 28 December 2021.

Whitney Lackenbauer, How long-awaited ‘transformative investments in infrastructure’ could address civilian and security needs in the Canadian Arctic, The Hill Times, 8 December 2021.

Peter Kikkert, Emergency management must be central to climate change response in the North, The Hill Times, 8 December 2021.

Forget the subs—let’s talk about the info and tech sharing in AUKUS, by Kristen Csenkey, The Hill Times, 6 October 2021.

Is Canada Prepared To Defend Against Submarine and Surface Threats in the Arctic? featuring Dr. Rob Huebert, The News Forum, 27 September 2021.

Sergey Sukhankin. Kaliningrad in the Post-Crimea Russia. A Bastion or a Weak Link? French Institute of International Relations, Russie.Nei.Visions, no. 124, 2021.

How Canada Can Prepare for the Quantum Threat, by Nina Bindel and Kristen Csenkey, CDA Institute, 2 June 2021.

Understanding UNDRIP: Challenges to legislating the UN Declaration on the Rights of Indigenous Peoples, featuring Heather Exner-Pirot, The Macdonald-Laurier Institute, 26 May 2021.

What Can We Expect From the New Canadian Surface Combatant? by Timothy Choi, CDA Institute, 26 May 2021.

The Arctic Council Goes Back to Basics, by Marc Lanteigne, Over the Circle, 21 May 2021

With U.S. climate drama behind them, can the Arctic Council turn the page in Reykjavik? featuring Troy Bouffard, Eye on the Arctic, 19 May 2021.

With or Without You: Arctic Security Dialogue is Meaningful Even Without Russia, But Here’’s How to Involve Moscow in the Future— And Why We Should, by Troy Bouffard and Elizabeth Buchanan, Modern War Institute, 4 May 2021.

The case for restraint and diplomacy as China turns towards the Arctic, by Gabriella Gricius, Responsible Statecraft, 25 March 2021

Arctic high on the agenda of Blinken’s phone call with Danish FM, featuring Troy Bouffard, Eye on the Arctic, 15 March 2021

Great Decisions 2021: The Fight Over the Melting Arctic with Rob Huebert, February 2021

OP ED: Is it time for a new concept of seapower?, by Rob Huebert, 2021 Cutting the Bow Wave, Combined Joint Operations from the Sea, February 2021

China Wants to Invest in the Arctic. Why Doesn’t Canada? Featuring Petra Dolata and Adam Lajeunesse, The Walrus, 29 January 2021.

Zero emissions by 2050 may be too late for Canada’s North, featuring Andrew Chater, iPolitics, 31 December 2020

Canada can promote transparency to form and strengthen norms as opportunities expand in outer space, by Alexander MacDonald, 16 December 2020, The Hill Times

A goldmine in Nunavut is the most recent local point of a longstanding debate: Is Canada doing enough to protect its interest in the North? Featuring Petra Dolata, CBC The House, 5 December 2020

NAADSN Quick Impact: Responding to the Hardening the SHIELD: A Credible Deterrent and Capable Defense for North America, by Andrea Charron, September 2020

How US foreign policy is failing in the Arctic, by Gabriella Gricius, Responsible Statecraft, 9 September 2020

Beyond the North Warning System, by Andrea Charron, 7 September 2020, War on the Rocks

NAADSN Quick Impact: The U.S. Withdrawal from Open Skies: Implications for the Arctic, by Troy Bouffard and P. Whitney Lackenbauer, May 2020

NAADSN Quick Impact: “Russian Arctic Military Exercise Draws Awe and Concern” … and Promotes Misconceptions about the Canadian Armed Forces and Threats to the Canadian Arctic?, by P. Whitney Lackenbauer and Adam Lajeunesse, May 2020

A new Quick Impact from @AdamPMac with opening comments to the House of Commons Standing Committee on National Defence 👇 https://t.co/ynNZXCaNpy

New @NAADSN_RDSNAA Quick Impact from @WillWJGreaves and Dr. Peter Kikkert with their opening comments to the House of Commons Standing Committee on National Defence on the CAF and Domestic Operations https://t.co/tJ4u4wcW0m 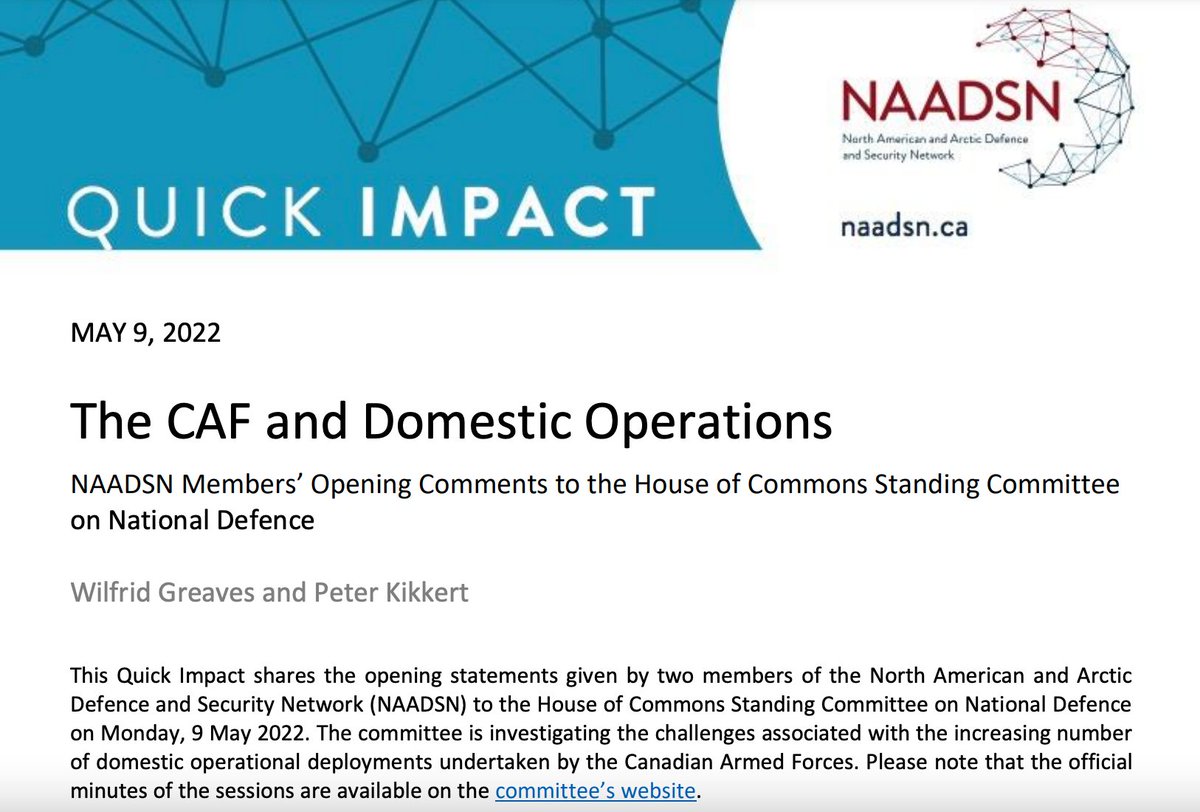 RT @ArcticYearbook: Strategy, Competition, and Legitimization: Development of the Arctic Zone of the Russian Federation - by @sergeysukhank…

RT @ArcticYearbook: This free online conference will bring together experts to discuss the consequences of the invasion on the Arctic regio…